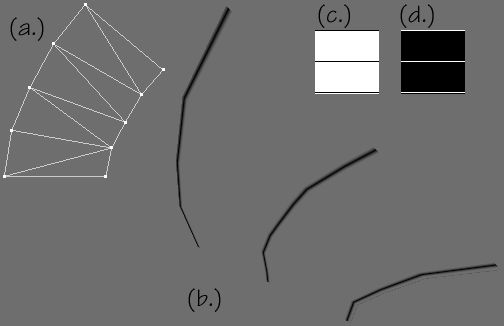 Now this is a real lesson. Not only that of perseverence, but also in actual artistic value. This picture has all the parts needed to reproduce this style. What is this style? It is comic book style motion lines, particularly that of a very fast moving arm or leg. Figure 1a. shows the mesh of the object. Figure 1b. shows the intended effect. Figure 1c. shows you the texture of the mesh. Figure 1d. shows the alpha bitmap. All are to shown at actual size. How does it work and how did I create it? It works by having a bunch of straight lines on a texture and bending the mesh to curve. Then the texture looks smooth and curved. Adding more vertices would increase the curviness. So how did I do it? I started by making a box. Then I extruded it a few times to the left. I made sure that they were all aligned. Then I delete all the sides and the backs. Then I put the two textures in. Then I took the mesh and rotated each vertical row a certain amount. I rotated the entire thing 10 degrees and then I selected all but the far right and rotated that. I repeated this for all. Then it was pretty curvy. It wasn't perfect, though. Rotating around the center of gravity will cause errors. To get a perfect curve, rotate around a user-defined point. That works really well. There you have it, easy motion lines. So how do you implement them? You could spend weeks coding them into your Engine if you're an insane programmer or you can just do them in the model. Hiding them might be a problem, but you'll figure it out I bet. The semi-sane solution for motion lines in a professional video game would be to make it a subobject of the character, only visible during a certain animation. That is what most professional third-person games do with weapons. So all you have to do is call your motion line a weapon, which is almost is... Motion lines are only useful for extremely fast moves, such as helicopter kicks, uppercuts, and roundhouse kicks.

A very quick idea or three. The first is that MP3 is no longer free. The solution to your problem is to convert all your MP3s to Ogg Vorbis. When the agent comes around to collect his fee, you'll say: "I don't own any MP3s, sorry." It's really sad that developers of immense technology create free standards and then decide to charge for them. The MP3 revolution is based on the fact that it is free for almost everyone. No one who doesn't want to has to pay money. You know how Fraunhofer's free advanced codec only allows mp3 coding up to 56kbps, right? You have to pay money to code it at 128kbps, which is the standard bitrate for perceptibly lossless from CDs. Well, there is this free hack out there if you can find it that allows you to code up to 300 or so kbps. Denying Fraunhofer money? No, people who would buy will bill. People like me who are too broke will code in 56kbps or get the hack or go with Ogg Vorbis. It is the hacker way. In fact, Ogg Vorbis sets a standard that rocks the s0x of losers who want money for high-technology. Even for commercial products, Ogg Vorbis is still free and open license. DivX and MPEG-4 should take note because Ogg Theora may make MPEG-4 obsolete just like Ogg Vorbis going to make mp3 obsolete. Ogg is good news for an indy developer like me who has zero money and only the immense amount of mental and physical labor that my brain, eyes and wrists can output. When I make a sellable product, I'll be sure to use Ogg. One thing that I don't have for Ogg yet is an automated mp3->ogg converter. Converting a few gigs of mp3 to wavs is not fun.

The second idea of three is that Digitally Imported is a wonderful Techno radio webcast. I'm listening to it now. Sadly it uses mp3, so I'm going to urge them to switch to ogg in order to continue for free. Until the agents come knocking on my door, I have a playlist with all their 24k stations here for you. Why 24k? Because I like the grainy sound. Many audiophiles like clean and clear music, like CD quality or better. I consider myself an audiophile, but I love gritty noise, the louder the better. I have re-encoded a few of my mp3s at 8 kbps and I like it a lot more than 128 kbps or 160 kbps. Just knowing that my music consists of only 1024 bytes per second gives me a rush. Maybe I'm just a mad scientist.

If you read the news, you know that the FBI now has the authority to check anyone's library records regardless of whether it is incriminating or not. But think just a second: library records incriminating?! Would the fact that I just loaned 1984 by George Orwell for a few weeks be incriminating? Would the fact that I asked that Steal This Book and Anarchist's Cookbook be transferred over to my local library be incriminating? Would the fact that I read a hundred Sci-Fi/Fantasy books (most by Piers Anthony) when I was 13 be incriminating? Fuck no! What the fuck do they think they're doing?! They're shredding the fucking Bill of Rights as seems to be the general idea these days. If we knew that the Sept 11 terrorists read a whole bunch of trashy love novels before they crashed into the WTC and Pentagon help the investigation? Well of course! Then we could arrest everyone who reads more than four trashy love novels at the same time. Like this woman. Pure Evil corrupting our nation is the only explanation I can give of why the FBI cares about what you read.

I've made plans to go out this Saturday and get drunk with a few housemates. ^_^ It'll be my first time legally drunk and only my fourth time being drunk. The days go by so fast, it wasn't long ago that I was a teenager. Before that I couldn't legally smoke cigarettes or buy porn. Before that, I couldn't drive. This is the culture of the age-discrimination and I've survived the years full of taboos only by breaking them constantly and gaining the positive aspects while indiviually seperating myself from the negative aspects. My one big advancement at age 21 is that I can finally get to see good bands. All the good bands play at 21+ venues. They play at no-cover bars or small booze-sponsored concerts. The prohibition of alcohol has stopped me from exercizing my First Amendment rights for the last time.