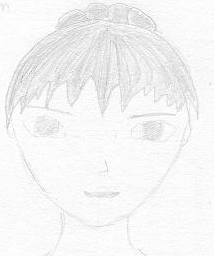 Greetings, this JF should not be here, but it is. Why? Because a certain motherboard has crashed fatally. But I am strong in the force and I have brought you not just something simple, but something cool despite the lack of a working motherboard for my main workstation. I'm writing this on my Sony Vaio laptop. It's a nice little thing, big keyboard, high resolution, and the willingness to work. It runs Windows. It's one failure I wish to rectify, but cannot because I lack a CDROM or floppy drive for this thing. Anyway, I like it how it is now, typing a rant in Notepad just like back in the day.

I drew this picture before my motherboard died. I'm thinking that if I can plan characters on plain paper and then import them into 3d via a scanner, I can make things work better on the graphics side of Hack Mars. This picture may remind you of one way back when and is actually an extension of it. Read the rant if you really want to know.

Yesterday, I decided to make some tunes. I had learned CSound a month or two ago and was ready to get down to it. I downloaded Python and went to work writing a script [4 KB] that would turn my headphones inside out. Of course, I couldn't hear anything I was writing, so all I knew was that I was going by very simple definitions of bpm (beats per minute) and then I just tapped out the melody on my leg using two fingers. That's how it's gotta go sometimes. So today I downloaded Csound and wrote the instruments for this song. It didn't take very long until I was saying "Way cool!" or something to that nature. The first song was indeed quite cool and only used two very simple digital electronic keyboards. I changed the first instrument into a drum as I had originally planned. My drum, however, is not a simple drum. It can change size, shape, and material very quickly. It's really a whole percussion set. It does a "dumm" and a "chhh" in this song and I like it quite a bit. I wish it were a bit louder, but I'm going to leave that for the next rev. Until then, enjoy [694 KB]. How did I make it? The output of the python script is the score. Then I write the orchestras (orc1.orc [1 KB] drum4.orc [1 KB]) to play it. The language of CSound is a lot like assembly except that it accepts more than 2 parameters. It makes sense to a programmer to do it this way, so it's cool. When I have both the orchestra and the score, I can run them through CSound. What is the correct command line? For me running CSound for Windows console, it is:
csound -Wdo song11c4a.wav drum4.orc song11c.sco
So then you have a wav file. I went over to Ogg Vorbis and downloaded OggDropXPd. It's very useful to convert a single wave file into an ogg and not much else. I recommend Linux for normal use. So there you have it. Simple, haxorish, and cool. If you don't understand the signifigance of CSound, I would wish that you would listen to Nuclear and get back to me on that. CSound redefines techno with a serious haxorish music programming language.