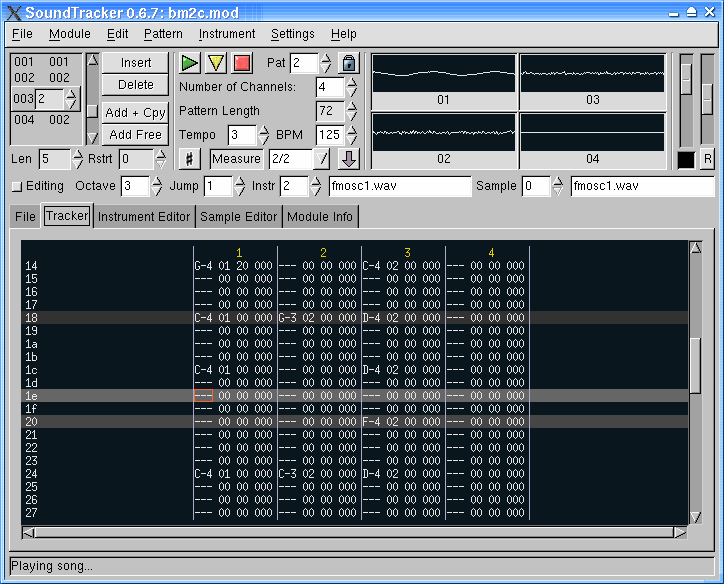 Today you are privaledged to hear my simple new melody, bm2c. BM stands for better music. BM will be my base for learning of melody. I lack the ability to create good music, only bad music, so I am working on taking my bad music and creating better music. How do I propose to do this? Simply by experimenting with the tracker and thinking about melody and rhythm together. I can put rhythm together atm. I cannot put together melody. So I start the better music song with a rhythm. I drum to some simple rhythm. Then I add a simple FM oscillator. I play notes until I find a combination that works with the rhythm. It isn't very hard because music just goes together. So then I have this new melody. For this one, I just copied the first pattern and put it on the second and third. Then I modified the second and third and then put links to the third in the fourth through Nth spots. I edited the second and third until they linked with the melody in the previous and next patterns and it was finished. At this point, I don't want to work on BM2 anymore since it's such a simple song. I want to advance, so I will go on to BM3 today.

At some point, I plan to be able to make a dozen ambient songs in 2 days. These ambient songs will be the mood music for Hack Mars. Since the songs are so simple, I can break them into 3-6 parts and put them into AltSci Artificially Intelligent Disc Jockey and 12 3 minute songs will become 12 60 minute songs. That is how HM will be 20 hours long. I plan 5 hours of walking, 10 hours of talking, and 5 hours of working. If you don't think it'd be fun, remember Final Fantasy 7 and GTA3. I believe that Hack Mars will be an excellent RPG just because it will be so packed with story and interaction.

A tear nearly comes to my eye looking at yesterday's pic. It's a masterpiece. Notice that it doesn't have jaggies? I took the screenshot in 1600x1200 and scaled it to 800x600. It gives the impression of hardware anti-aliasing. Well, I guess I could add hardware anti-aliasing to HM, but who wants to decrease the framerate like that? Just increase the resolution.

I read a bunch of slashdot last night. It's quite interesting topic. My parents worry about me working entirely with Open Source / Free Software. "Where will you make money?" they ask whenever the topic surfaces. My father is for all practical considerations Clemens. I call my father's business "The Dark Side" because like Black Hat Hackers, there is something really wrong with writing malware no matter who is on the recieving end. I can't disrespect my father too much because he does good work and sometimes for non-malware projects.

But back when I was 13, I made a serious decision from which I will not deviate: I will not write software just for money. This has serious implications. I have modified it, but the core stays the same. Since I was 13, I have written a lot of software, but none of it has been just for money. Only in the past 1.5 years have I discovered Open Source which frees me to write software at all. Minor conflicts have arisen recently. I wrote malware to pay for my first year of college. Over winter, I wrote commercial software for 2 weeks to pay my rent so that I could stay in my Seattle residence. Both of these have higher purposes, but involve writing commercial software just for money (with the added condition that I could not do without that money).

1) I don't want megabucks. I wouldn't know how to spend it. I wouldn't want to spend it on myself. I don't think other people would be able to use it efficiently. I could spend it so that I can use my time freely, but that's the opposite of the commercial software system. My mother thinks I should do my time and play the stock market at 35. No, thanks, ma. I'm getting out before I'm 24.

2) I don't want a family. I have moral objections to the whole system. The dating biz where women only like rich guys. Let them go fuck themselves, I say. Spending 20 years raising a brat just like 8 billion other brats? Can you say 'pointless'? Love? Can anyone imagine more contrived bullshit than that excuse? People who assume the family route are ignorant as hell. The 21st century involves techno-sapiens who care more about self-actualization and living the true answer to life than perpetuating the cycle of human overabundance.

3) I will not be bought. I have a dozen cards up my sleeve: hacking, anarchy, freedom, and philosophy. All are strong and will not compromise. This bullshit about everyone needs to pay bills needs to take a break. I have an analogy that people don't seem to understand:

You, great capitalist will not steal. You have morals that say that you would rather suffocate than steal air. In my attack on commercial software I put you out of work for 10 years and you finally go broke. Your family of four are starving in the streets of suburbia. I walk by with a bag of groceries and I accidentally drop one of my ten loaves of bread. You, capitalist can take it or return it to me without legal or societal consequences. Do you steal the bread?

I, great anarchist will not code for money. I have morals that say I would rather write assembly in my mind than code VB.NET for money. In your attack on open source/free software, you put me out of work for 2 years and I am finally broke and severely in debt. I am going out on the street in a month if I don't make some money. You have a malware project for me to code. I, anarchist can say go fsck yourself or write malware without legal or societal consequences. Do I write the code?

If you read the two and see any difference, my ears are open.

4) I don't pay to develop software, do you? Yes, Clemens pays to develop software which he makes money from. I reject that. Code --> Benefit. If someone asks for money for their code, I will weigh in my mind their contribution and see if it is worth it. If they do not give me the source, how have they really benefitted me? Am I a consumer, doomed to buy increasingly more expensive upgrades to poorer software?